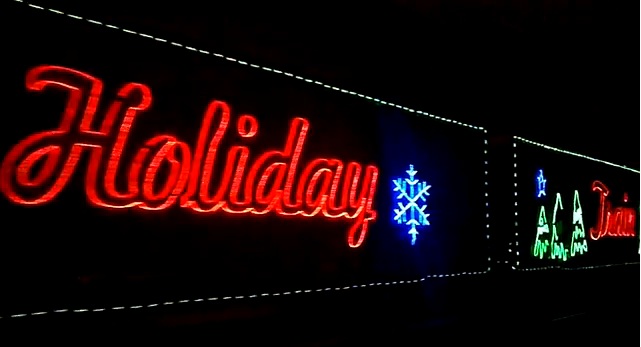 Here's a video I shot of the 2012 Canadian Pacific Holiday Train as it left the Milwaukee Amtrak station, after stopping for their annual performance and mission to raise awareness of hunger in our world. This excellent community relations program has been sponsored by the Canadian Pacific Railway since 1999. Food and funds gathered at each stop stays in the communities where they are collected, but in addition this year, CP also decided to match funds collected in over 50 US stops up to $250,000, to be donated to Feeding America for Hurricane Sandy relief. Good show, CP!

09/09/2012: Two weeks ago, I was out in the yard and realized, "Shit. They're back". No, not in-laws. Not the door-to-door window salesmen. It was worse - much worse. It was the Yellowjackets! [Cue the shrill horror film violin sound effect].


I thought I made them go away last year with liberal use of Raid Wasp & Hornet Killer. Actually, I had, but just the drones. I started to read up on the quirks and habits of yellowjackets, and learned that the queen might venture outside of the hive, but only in the early spring. So while I got rid of the external signs of the nest last year, this year's larvae had already been produced. Rats. Err -- bees!

Off to the hardware store we went. I decided to try a bee trap, and bought the finest one they had to offer. It came with some very scientific sounding attractant, 2,3-dichloro-hexaphenylthingee-polywhoosit, or something like that, and I gave it a shot. While the bees gave the trap notice for a few minutes, they quickly returned to their normally scheduled programming. After three days, and not a single bee trapped, I brought the device back to the hardware store for an exchange of a different type.

The new trap was sort of a plastic mayonnaise jar, with holes in the lid. The attractant smelled like apple cider. The bees are supposed to go through the holes in the lid, and drown in the inch of so of apple concoction you mix up, and put into the jar. (Hint: If you plan on buying one of these, just use your own mayo jar, drill some 1/4" holes in the lid, and put an inch of apple juice in the jar. It.ll save you seven and a half bucks and a trip to the store, assuming you already have some apple juice). After a week, even though the critters were quite interested in the apple potion, we had successfully drowned only seven bees and two flies. Back to the drawing board.

One of them had gotten into the basement, and I grabbed my shop vac hose, turned the vac on, and *thwoop* sucked the bee right up. Then a light went on. I went back to the hardware store, and got few more hard sections of shop vac pipe to add to the ones I already had, and arranged the pipe behind a rose bush right next to the entrance the bees are using under the overhang to our kithchen. I turned the vac on, and the rest is history -- at least for the bees. You can put your hand on the hose where it bends, and feel a very satisfying *thwap* as each bee gets propelled through the hard pipes, and hurled against the inside of the flexible hose.

Hopefully the drones haven't had enough time to gather winter food for the next generation. The plan is, once I don't see any more drones, to caulk shut the access to where the nest is. With any luck, the colony won't be able to survive through spring, and the queen won't be able to get out either. In any event, I'm ready for them next time. And it's working. Totally cool:

05/31/2012: What a sad evening. On the way home from Racine, I heard the engineer of Amtrak 341 declare an emergency - a "pedestrian strike", which is a kinder, gentler way of saying suicide. I happened to be very close by, and when I went east on Puetz Road from 13th St, emergency responders from Oak Creek were just arriving on the scene. There the northbound 341 sat, just a short distance south of the Puetz Road crossing.

It's a real shame anytime anybody ends it all like that, and I feel truly saddened for the train crews, seeing as there's not a single thing they can do to stop their 70+ MPH train when someone steps in front of it. The engineer said, "He was standing in the middle of the track, just watching me come". That's a real bitch, as it was for the conductor. He had the job of walking back to the "impact site" and figure out where the remains were, and he had to look for a little while once he got back there. There was a palpable twinge of despair in the conductor's voice when he gave his wittness: "The guy got obliterated".

I'm really sorry for you guys.

This is the second one of these I've heard. I'd rather that only fun and interesting railroading transmissions would pass through this site. God bless you all.

05/28/2012: Here's the better of the two rail grinding videos posted to YouTube. The upload speed from your average residential RoadRunner connection doesn't support 250MB videos very well. This was also an opportunity to play with Windows Movie Maker for a little light editing and fade in/out effects. Also, figured out (after sorting through a large amount of just wrong information on the web) how to create a multi-resolution favicon for this site. You may notice it in the address bar of the browser you are viewing this in. It's simple stuff, IF you know how. If you don't, heaven help ya...

05/21/2012:OK! After spending a lot of time getting an interesting looking format completed, I think I have what you can call a website. Of course you already know that if you'r reading this. I'm planning on publicizing the railrod radio audio streams at Railroadradio.net now that the remainder of this site isn't so embarassingly experimental looking.

05/14/2012: I've been listening to the CP C&M and Wisconsin dispatchers giving Track and Time to the rail grinding crew as they've been working their spark producing magic on the rail heads north and south of Milwaukee, but I haven't had the opportunity to be in the right place at the right time to see them work - until tonight. We were downtown, and while taking our usual route back to West Allis through the Menomonee Valley (site of the former West Shops), there it was - the Loram rail grinder proceeding west through the Cut Off at the west end of the Milwaukee yard. I recently got a Motorola Electrify phone from US Cellular, so we ducked under Bluemound Road to take a movie. Terrific! Wait, not so terriffic. Did I mention this was a new phone? I didn't know I had to press the record button. OK - over to Sears Crossing, and down the access road to a spot opposite Saz's parking lot, under the Hawley Road overpass. I took this video there, and this one a little further west at the 72nd & State St. crossing, near Hart Park in Wauwatosa. Enjoy!